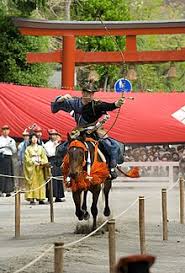 From the Tsurugaoka Hachiman homepage.

Yabusame originated in middle of 6th century as a Shinto ritual in which horseback riders shoot arrows at wooden targets set up in the shrine precincts. Today there are various styles and manners of Yabusame inherited by different shrines and particular families. It was common in the ancient past that the result of Yabusame depended on the number of targets successfully hit. Fragments of the targets were used to tell fortunes. The target and arrows used in successful shots were kept as amulets.

Yabusame was introduced at Tsurugaoka Hachimangu in 1187. Minamoto Yoritomo studied the manner of this ancient rite and had his warriors acquire the etiquette and skills necessary forYabusame. Yabusame was performed as an offering to Hachimang kami. The Azuma kagami records that all the archers perfectly struck all the targets in the first Yabusame at Tsurugaoka Hachimangu. Understandably, it was the proudest thing in the life of every Kamakura warrior to be selected as an archer in Yabusame.

※Kami (the Japanese word for Shinto deities or sacred beings) 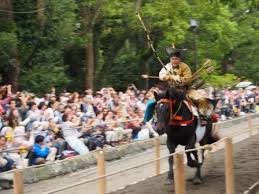 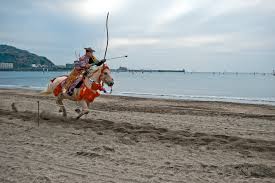 Yabusame on the beach in Zushi.