Already the second week of December and winter has finally set in. The trees are leaving their colorful foliage, the turtles in the temple ponds have gone underground to hibernate. Yes, it is cold. Lol.
This week let’s talk about a dish that the Japanese really love to eat in the wintertime. It is called a Nabe.  Nabe is basically a hot pot that comes out in the winter. Everyone sits around the table and pick out the ingredients from a communal pot. We each have our own chopstick but many times there is also a communal long chopstick to grab the ingredients from the pot. 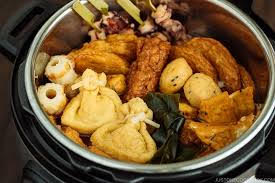 There are several types of Nabe. Let’s start with one you can buy already made at the corner convenience store . It is called the Oden. Just pick out the ingredients you want at the convenience store, take it home and put them in the communal pot, heat and eat. Full of all different kinds of fish cakes.
Here is what they say at the site “Savor Japan”.
https://savorjapan.com/contents/discover-oishii-japan/the-complete-guide-to-nabe-a-staple-japanese-winter-food/
This dish is such a classic, to the point where you’ll see it simmered in dashi (broth) by the cash register at any Japanese convenience store in the winter. The ingredients vary slightly from area to area, but usually, other than daikon (Japanese white radish), egg, konjac, fried tofu, and beef sinew skewers, you will often find hanpen (steamed fish cake made from fish paste and Japanese yam) and satsuma age (deep-fried skewers of fish paste kneaded with vegetables). To make it, first, a dashi (stock) is prepared with katsuobushi (dried tuna flakes) and kombu (kelp), then it’s seasoned with soy sauce, sake (a type of Japanese alcohol), and mirin (sweetener), and finally, the ingredients go in to be slow-cooked for several hours, absorbing the dashi’s deep flavor. When the ingredients are ready, they’ll have a slight sweet flavor from the dashi and soy sauce. If you want to add a kick to the flavor, try eating it with some mustard or miso! 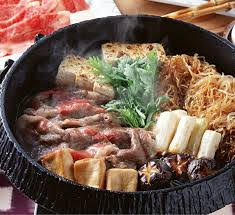 My favorite is called the Sukiyaki. It is basically a meat and vegetable Nabe. It is sweet in a way. In the sixties there was a Japanese song that became a hit in America called “Sukiyaki”. I had nothing to do with this dish but it must have been the only Japanese Americans knew. Lol
Here is what Savor Japan says about this.
Sukiyaki is made by stewing together beef and vegetables in a soup called “warishita,” made by mixing soy sauce, sugar, and sake. You then dip the ingredients into a raw egg mixture before eating it. The combination of the salty-sweet ingredients with the full-bodied flavor of raw eggs is highly appreciated even by foreigners. In general, you start by boiling the beef in a warishita-filled nabe and then add vegetables and tofu. If you overcook beef, it’ll turn out too tough, so you have to eat it as soon as it’s ready. When you’ve eaten all the ingredients, it is strongly recommended to add udon to make udon suki(yaki). The noodles will completely absorb the flavor of the sweet warishita, the beef, and the vegetables, which matches divinely with their chewy texture!
Another Nabe that is very popular here is called the Chanko Nabe, It is the hot pot that is famous because the Sumio wrestlers eat it in their Dojos. It is basically a pot with everything thrown in. What ever is around.  This is something that you don’t usually make at home but go to a Thank Babe restaurant to eat. 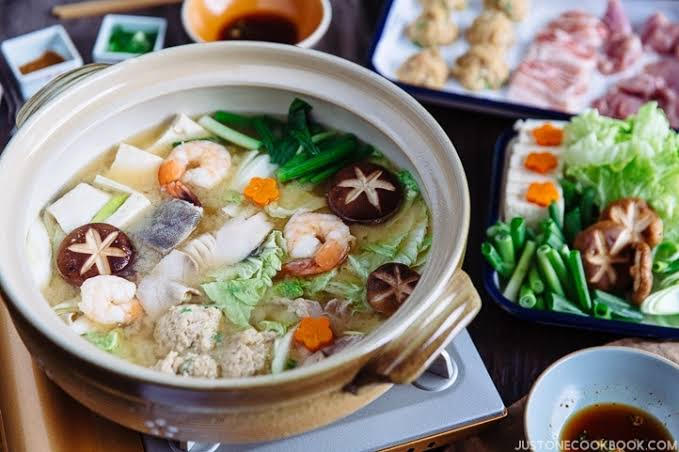 Here is what Savor Japan says about the Chanko Nabe.
Chanko nabe is a hot pot delicacy prepared and eaten by sumo wrestlers. The seasonings are added to the dashi itself, and ingredients like meat, fish, and vegetables are stewed together in large quantities. Sumo wrestlers eat it every day to build their body, and you can either cook it at home or taste ones prepared by former sumo wrestlers in specialized restaurants. Again, there are no restrictions in terms of seasoning and ingredients, and the preparation is pretty similar to that of yose nabe. You may either go for meat or seafood chanko nabe. Just remember that it is the food of sumo wrestlers, so it has to comprise of huge amounts of ingredients to be fulfilling!
Check out their site for many other kinds of Nabe. Lots of pictures too.
https://savorjapan.com/contents/discover-oishii-japan/the-complete-guide-to-nabe-a-staple-japanese-winter-food/
I’ll see you in a week..
George